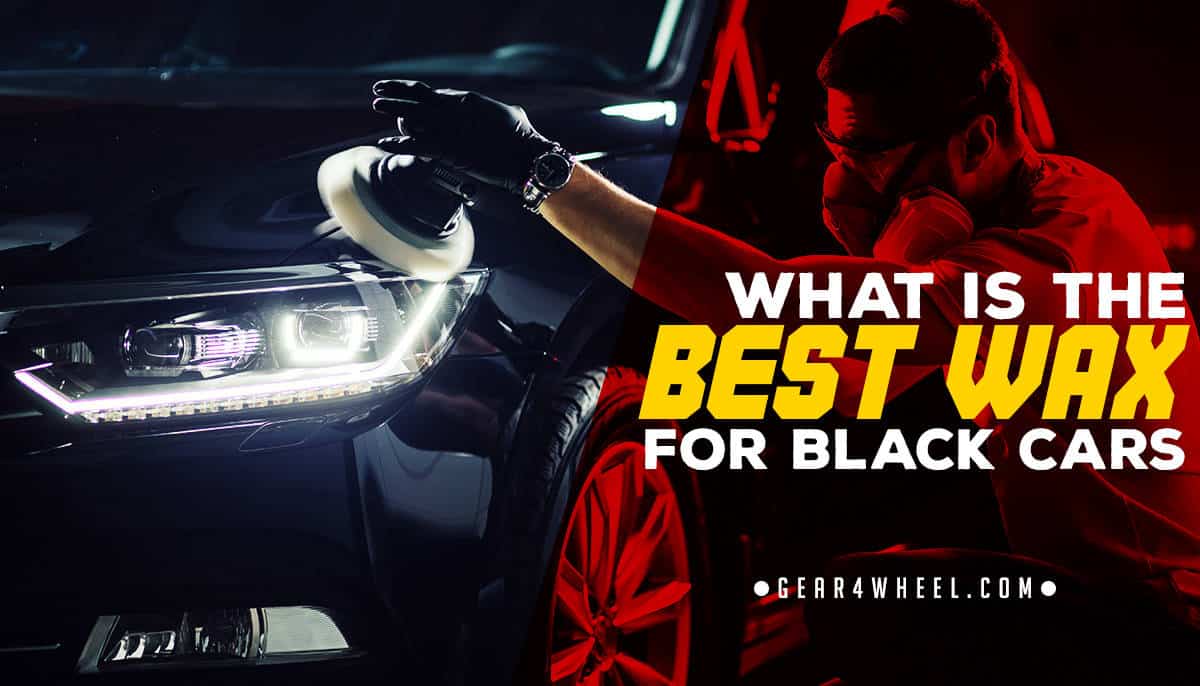 We all knot that while bold colors can look incredible with a brilliant shine when waxed, if your car is black then it’s a whole other story.

To get this glossy, silky show car kind of effect isn't as easy as we'd like to.

Some waxes turn out too shiny and it looks like a pimp's limo, and some waxes fade too quick or just stay with a matt touch that looks like sh*t.

To help you find the perfect wax for your ride, I've done some good research and here I present to you the 5 best car waxes for black cars that you can buy right now.

Let's check this out.

The process of waxing a car is pretty much the same regardless of the color of it. However, when it comes to black paint, swirls and other marks will be a lot more noticeable so I suggest you to read this forum thread which is packed with helpful advice on the "how to".

Even some of the products recommended there are still good but it's very outdated in that sense.

When it comes to waxing your car, you can either do it by hand or with a polisher. While a machine can be much more convenient, you don’t get the same level of personal attention as you do with your hand.

As such, this wax from Migliore is designed for perfectionists who want to do things the old-fashioned way.

What makes this product so high-end is that it is just wax with no fillers or oils.

Since oil can dry out faster, it doesn’t retain the same level of shine as wax, meaning that your car will look dull after a few days. In this case, however, with 50% carnauba, you don’t have that problem.

The downside of this wax is that it can be hard to work with, particularly for your first time. You have to soften it first and then apply it in a thin layer.

Because there is only so much per can (8 ounces), you’re forced to be much more conservative with it.

Overall, if you are a bit obsessive about your car and you prefer to wax it by hand for a pristine finish, then you will love this product.

This is a butique product. Show car results. High ticket price... and it's worth every penny.

It's in fact, my favorite carnauba car wax of the year.​

While Migliore is by far the best brand for high-end waxing, this next company is second in line. If you want a brilliant finish and you want something that is much easier to apply, then you will appreciate the Natural Brilliance of Pinnacle.

It has a buttery texture that goes on smooth and can be wiped off just as easily.

What makes this product so great is the fact that the company makes its own wax. It processes a unique strain of carnauba so that it is more malleable and lasts longer. In fact, you can go up to 90 days without having to remove your coating. Also, it’s haze and streak resistant and comes with its own applicators and towels.

As far as downsides, this wax is expensive, and the results may not be that much higher than other, more cost-effective blends.

Taking a step down from the premiere waxes above, now we have Meguiars Gold Standard Wax. When compared to the high-end versions of Migliore and Pinnacle, this option provides a decent finish and is much more convenient overall.

Also, it comes with special polymers to help conceal scratches and swirls, which the premium waxes don’t do.

Overall, if you care about your car and you want a deep reflective finish without the high price tag, you will appreciate what Meguiars has to offer.

Although it doesn’t come with an applicator or towel, you can easily find those at any auto parts store.

Performance-wise, this wax applies super easy and rubs off just as fast.

That can also be a bad thing, though, as you may inadvertently remove some of it during your daily routine.

This can lead to bald spots in your finish, so keep that in mind.Another great thing about this product is that you get two for the price of one.

When trying to save money on car wax that can be a huge incentive, so it may tip the scales in its favor. Also, you get more per can than you do with some of the higher end versions, so that can be a bonus as well.

Even though this is a paste wax, it almost looks like a liquid version when you first apply it. The reason that it has such a wet sheen is that it is carnauba wax mixed with a bunch of different oils.

You get montan oil, banana oil, coconut oil, almond oil, and propolis, which is derived from beeswax.

All of these blend effortlessly to bring out the richness and vibrancy of your black car.

Best of all, this product is formulated for darker colors, meaning that it will also help conceal things like scratches and swirls.

When it comes to wax, you get two primary benefits: protection from the elements and a brilliant shine.

This product provides both, but they don’t last as long as each other.

According to the manufacturer, the wax will last up to four weeks, but the shine will fade long before then.

The reason for that is because the oils can dry up relatively fast, leaving a duller shade of wax behind.

So, you want to keep that in mind when deciding if you want this.Ideally, you would get this wax for show cars or vehicles that don’t get out much so that you can maintain a better finish for longer.

However, if you’re applying it on your day-to-day ride, then it won’t retain as much brilliance as some of the higher end products.

Our final wax is a liquid polymer, which means that it’s super easy to apply and remove, but it won’t provide the same kind of finish.

One thing about paste wax is that it creates a much thicker layer, so to get an identical effect you have to apply several coats of this blend.

That being said, if you’re looking for something cheap and easy that won’t leave a bunch of streaks or residue, then this can be a great option.

One of the things that’s kind of a drag with this product is that it doesn’t dry completely black.

Thus, you may get a different shade than you prefer, and it may not cover up scratches as well as a result. Again, you can add more coats to minimize this problem, but you’re still working with a so-so wax.

After looking through all of these different waxes, we have to say that the Migliore Primo is by far the ideal choice for any black car.

Not only is it a higher-grade material than the other options, but it provides a much better finish as well as improved protection for your vehicle.

Even though it can be somewhat expensive, it’s worth every penny. Overall, if you’re serious about your ride, then Migliore is the way to go.