​Cheaper alternatives are available, with a similar specification.

​Integration with mobiles, including GPS, calendar and more.

​Easy to pick up, plus a user manual for if you get stuck.

​This review looks in depth at the Pioneer AVH-X490BS in-car stereo receiver.

As an aftermarket model, it is a replacement to the default stereo included within your vehicle, allowing you to extend the capabilities of your car’s entertainment system.

We’ll look at the pros and cons of this model, as well as what’s included and what features you get. 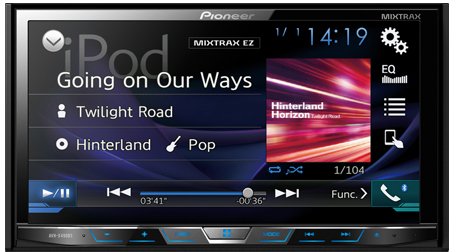 ​Pioneer has had a powerful stake in the entertainment industry for over 4 decades, contributing to the development of DVD and Blue-ray technology.

The company also provides professional DJ equipment. As a result, you can be sure that you’re in safe hands when purchasing an audio entertainment device from this brand.

The Pioneer AVH-X490DAB stereo is an in-car powerhouse that enables you to harness the power and functionality of your smartphone on the road.

A 7-inch full-color touchscreen provides extensive control over the built-in functions, with a wired connection available as an alternative to Bluetooth. 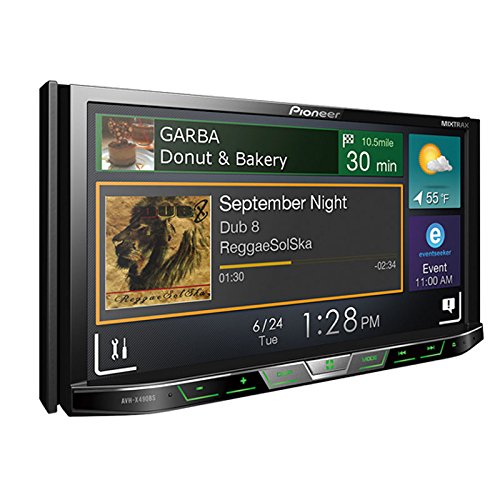 ​Typically, aftermarket car stereos come in either analogue format, with physical buttons and a basic display, or the more advanced type that emulate the functionality of a smartphone or tablet. This car stereo is the latter, featuring a full-color touchscreen with minimal intrusion from physical buttons. Thus, it’s better suited to those who like their smart tech, as opposed to fans of retro analogue radios.

If you’re the opposite type of person and have a collection of CDs that you just can’t seem to let go of, then you might be better looking elsewhere. Sure, this model has a CD player built in, but for pure CD entertainment, it’s not the cheapest model. If you’ll be predominantly using CDs over Bluetooth, then you can get far cheaper alternatives. 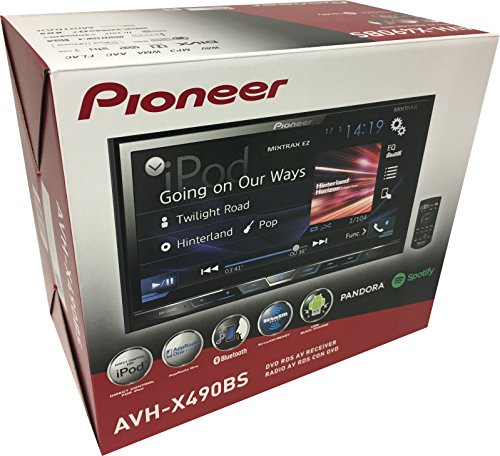 ​To get the AVH-X490BS installed into your vehicle, you’re going to need certain components. The wire hardness provided within the box is used for connecting the power source and speakers, with installation screws also included for fixing the unit into place. Installation is reasonably straightforward and detailed within an included instruction manual for convenience.

Also included in the box is a USB extension cable for providing better reach to connected devices, as well as a Bluetooth microphone. The mic can be used for voice control, including integration with the Siri feature on iPhones. The microphone has a cable of around 10 feet, so you won’t struggle for space when installing this component.

Aside from these components, you of course receive the stereo itself, as well as a warranty card that details the coverage offered to your device once purchased. That rounds off everything that’s included within the packaging.

Pioneer's AVH-X490BS is fully equipped to connect to your iPhone or iPod for direct music streaming. This means that you can use your playlists directly from applications such as Spotify or Apple Music.

This is achieved through the use of several audio codecs and high-quality audio components and features that are directly built into the unit.

The unit is also compatible with Android smartphones.

In addition to streaming your music on to go, the touchscreen also pulls through details about your music, including song, artist, time and album information, displaying everything with perfect clarity. These features are supplemented by both link search and alphabet search features, which help to locate content more quickly on the road.

One of the most defining features of the unit is the compatibility with certain applications, particularly maps.

You won’t need a separate, expensive GPS unit for navigating the roads anymore. This touchscreen can link directly with maps applications, providing route guidance in full color. The only downside is the application availability; the apps that you can get are great, but the selection can be limited at times.

Pioneer have had an important stake in the audio entertainment industry for nearly half a century, with contributions towards the development of several industry-defining technologies such as DVD and Blu-ray playback.

Though they may not be the first brand that come to mind when thinking about car stereos, this history makes it clear that you’re in good hands with one of their audio products.

If you’re the type of person who likes to enjoy music streamed directly from a mobile device, you’ll love the integration with mobiles and audio streaming over Bluetooth.

However, if you’re more of a radio head or the type of person to stockpile CDs, then you could easily pick up a cheaper model with many of the same functions.

The touchscreen is one of the priciest components, and by ditching this, you can often pay far less.
CHECK LATEST PRICE ON AMAZON.COM
Summary
Reviewer
Alex Meyer
Review Date
2022-04-07
Reviewed Item
Pioneer AVH-X490BS
Author Rating
4