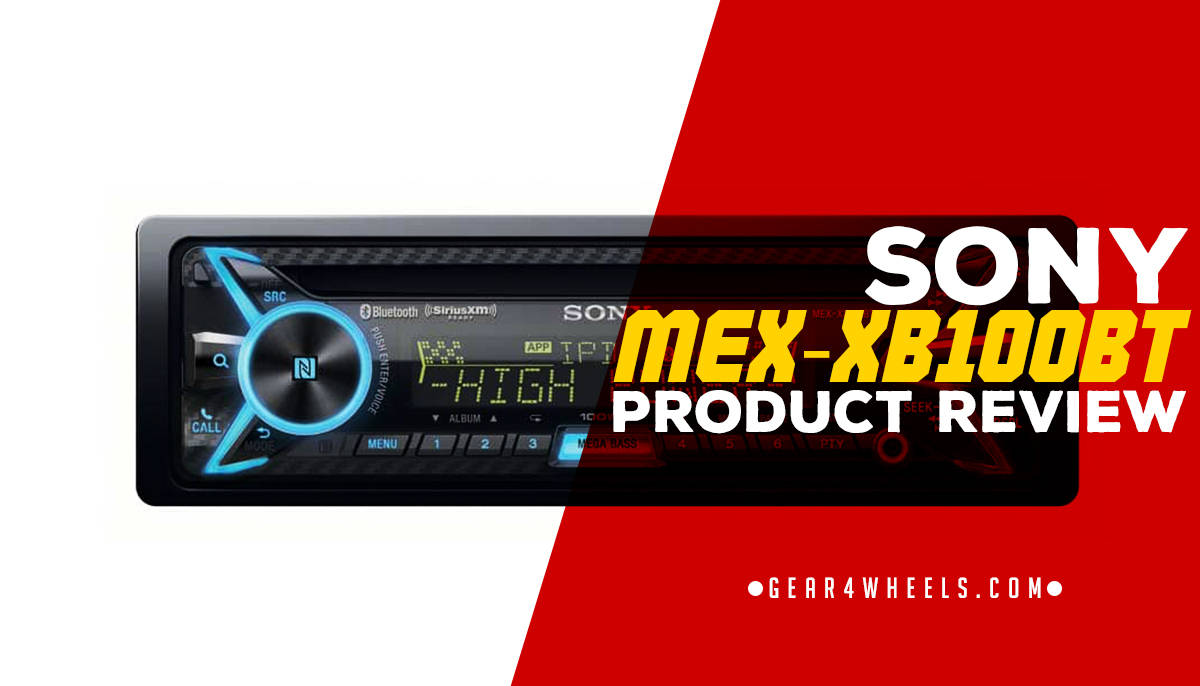 ​One of the best quality single DIN radio receivers you can buy.

​The stereo isn’t cheap, but you do get a lot for your money.

​Let down by the need for a third-party mobile application.

​Stripped-back functionality and no touchscreen make an easy to use product.

An aftermarket stereo is a standalone entertainment unit that you can fit into a vehicle yourself. This may be because you own a car without a stereo, or you’ve grown tired of the level of functionality offered by the existing system. In this review, we’ll discuss the Sony MEX-XB100BT, which is a single DIN in-car stereo receiver.

As mentioned above, this single DIN stereo has an incredibly powerful set of components under the hood. With the stereo's high-power built-in amplifier, this model is perfect for the person who likes to blast out their music at the highest volumes, without the need for adding in your own amplifier. Though expensive, you'll save money in this scenario on not having to add on your own amp component.

However, the product would be less suited to your smartphone and tablet addict, as the absence of a color touchscreen makes this stereo feel less like a smart product despite its smartphone integration. What’s more, Sony’s own Song Pal application must be installed for you to be able to stream music and control the stereo with your voice. With a need to open this application each and every time you get into the car, fans of smartphone convenience might grow tired of this fiddly integration.

Out of the box, you get the main CD receiver unit, complete with a sleeve and trim ring. In almost every case, you'll also need a speaker and power/ground harness to install an aftermarket receiver, and both these installation components come as standard.

Next up, there are 4 flathead ISO-mount screws for fixing the receiver into place, as well as a face fixing screw and two-sided tape. There are also 2 radio removal tools to help you detach the machine should you need to. In case you're stumped by the first-time setup, you'll also get an instruction manual with setup and feature instructions.

A microphone complete with visor clip is also included, attached to an 11-inch cord; this is used for the voice control feature, with enough cable to position the mic wherever it’s most required. Finally, you'll also get a wireless remote control that can be useful for setting up the machine for the first time, or adjusting the various sound settings built into the machine.

Aside from the built-in 4-channel receiver that we've already touched on, this stereo also packs in all the modern and high-end features you'd expect from the industry. Not only is there a 10-band equalizer as standard, but a multi-level subwoofer crossover menu complements the 5-volt pre-outs that transmit signal to them.

The button illumination options and LCD display itself can be independently controlled, allowing a vast range of color customizations. Not only is this aesthetically pleasing, but the lights also create an incredibly easy to read display. The only trouble you might encounter is in using the unit in direct sunlight, though this is a problem that’s shared with most in-car stereo receivers you can buy.

This stereo also comes with a feature that’s not standard in most aftermarket receivers. Sony have built in sound and color synchronization, which pairs your music with custom-color LEDs. This feature senses the beat of your music's bassline, changing color and pulsing to the tune of the track that you're playing.

Finally, it's worth mentioning that Sony's experience in creating quality user flows is evident in the stereo's built-in menus and controls. They're laid out in a manner that's simple to navigate and understand.

If it’s a single DIN stereo that you’re after, then the Sony MEX-XB100BT is one of the most powerful models that you can get. Sony hasn’t skimped on the design and build quality, with an incredibly powerful 100-watt, 4-channel speaker included by default. If you love your music, then you’ll never tire of the amazing bass and volume that this amp puts through your car speakers.

Unfortunately, the one place that this stereo is let down is in the integration with your smartphone. Whereas other stereos can stream directly from your phone using little more than a Bluetooth connection, this unit required you to have Sony’s own Song Pal application installed on your phone, which must be opened every time you want to stream from your phone. For some, this might become an inconvenience that is too much.
CHECK LATEST PRICE ON AMAZON.COM
Summary
Reviewer
Alex Meyer
Review Date
2021-04-07
Reviewed Item
Sony MEX-XB100BT
Author Rating
4