Many of us have previously heard that you need to regularly replace the timing belt to allow your vehicle to operate at peak performance. But few of us know what it is, what the purpose of a timing belt is, and what it even looks like.

We will investigate what is a timing belt and what warning signs to look out for to know when it is time to replace it. We will also find out whether replacing this engine part must happen in conjunction with maintenance schedules and if it is a maintenance item.

Sit back, relax, and learn more about this and what happens when the timing belt breaks.

Quick Navigation
What Is a Timing Belt?
The Purpose of a Cam Belt
When to Replace the Cam Belt
What Can Go Wrong
Why Is a Damaged or Broken Cam Belt Bad?
Conclusion

What Is a Timing Belt?

Timing belts, timing chains, or, in some cases, timing gears help to synchronize the camshaft and crankshaft rotation cycles. When these two are synchronized, the valves can open and close at the correct time and correspond to the position of the pistons.

In modern cars, rubber timing belts are frequently used to prevent excess wear and tear, and they also run much quieter. There are other components that are also driven by the cam belt, such as the water pump and the oil pump.

This toothed rubber belt is located at the front of the engine and protected by the timing belt covers. Some motor manufacturers use a serpentine belt to drive most of the peripheral parts instead of a cam belt for the water pump.

There are many different timing belts; not all vehicle manufacturers use the same belts for their engines.

The Purpose of a Cam Belt

The main function of a cam belt is to control camshaft timing, so it synchronizes with the rest of the internal combustion engine. The engine valve's timing must be set correctly for the engine to perform at peak performance all the time.

For instance, if the intake valves open too quickly, it will result in poor engine combustion and, in turn, loss of overall engine power. That is why a bad timing belt should be replaced as soon as possible to prevent costly repairs.

Keep in mind that replacing the timing belt is better left to expert mechanics to prevent engine damage.

When to Replace the Cam Belt

Replacing the cam belt can be costly, especially if you experience a broken timing belt. In some vehicles, if this tooth belt brakes, it may lead to broken valves. Consult your vehicle manufacturer to make sure about this.

There are some clear-cut signs to look for if you want to confirm whether it's time to replace the belt. Make sure the idler pulley is still in the right position and the timing belt tensioner is tightened properly.

See the following list of common signs that might be an indicator that it is time for a new belt:

While all these signs can be because of the cam belt, it might also be a defective timing belt tensioner. 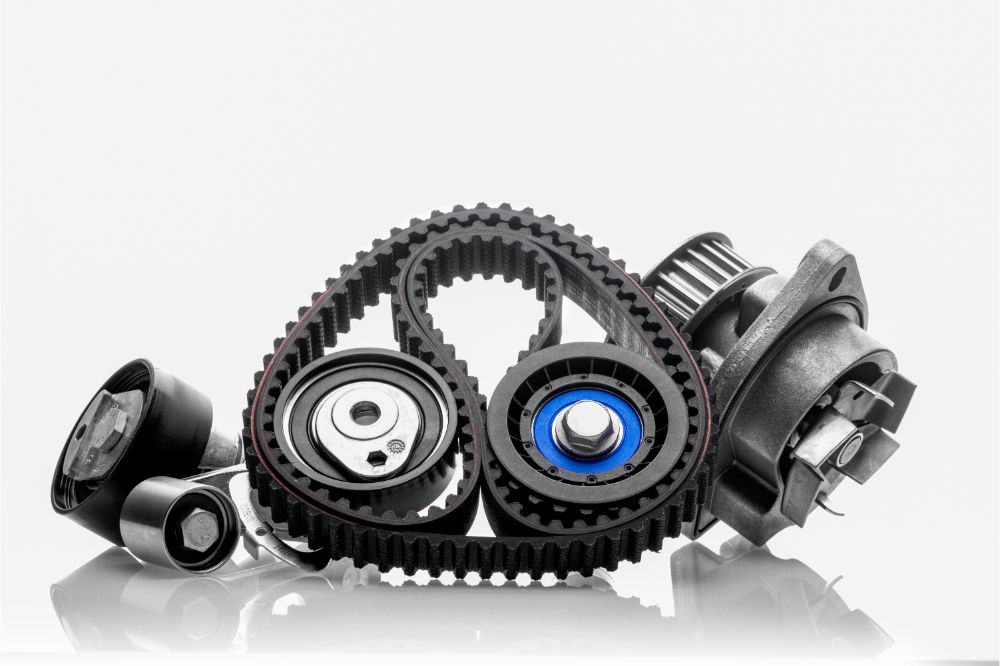 What Can Go Wrong

There is a myriad of things that can go wrong with the cam belt, and it may cause a lot of damage to your engine.

One of the most common things that can go wrong is that the auxiliary belt on some vehicles may cause damage to the cam belt. This belt runs on the same pulley as the cam belt and may get damaged, allowing fibers to go underneath the cam belt.

If the timing belt is not properly installed and is too loose, it may cause internal damage to the engine. This happens when the valves and the piston touch each other, causing damage and misfires in the combustion chamber.

Another obvious problem can be that the upper timing belt cover is not installed correctly and thus can cause interference with the belt. This may cause damage to the belt, making the belt move out of position, and causing the camshaft to go out of sync.

If the cam belt gets in contact with motor oil, it may cause the belt to slip and cause damage to the shafts. This can be from spilled oil or oil leaking from the engine and causing the belt to be unable to work properly.

Why Is a Damaged or Broken Cam Belt Bad?

In modern vehicles, the interference engine is designed to produce more power and efficiency, but there are some trade-offs. One of them is that the valves and the pistons are in the same space inside the cylinder simultaneously.

This scenario would happen if the pistons are fully extended and the valves are open simultaneously. If the camshaft and the crankshaft are synchronized this situation will not occur and your engine will operate properly.

But if the cam belt breaks or is in bad condition it may cause the pistons to hit the valves which may cause damage. Costly repairs will be needed which may easily be the same price as a new engine.

If a bad cam belt breaks it can cause the steering and the brakes to fail and cause the driver to have an accident. So, it is quite unsafe to drive a vehicle with a bad timing belt that may break at any moment.

Now that you know what a timing belt in a car is and the dangers of not maintaining it, you are able to understand how your vehicle works even better. The next time you are unhappy with the amount you pay for maintenance, think about potential damage if the belt breaks at some point.